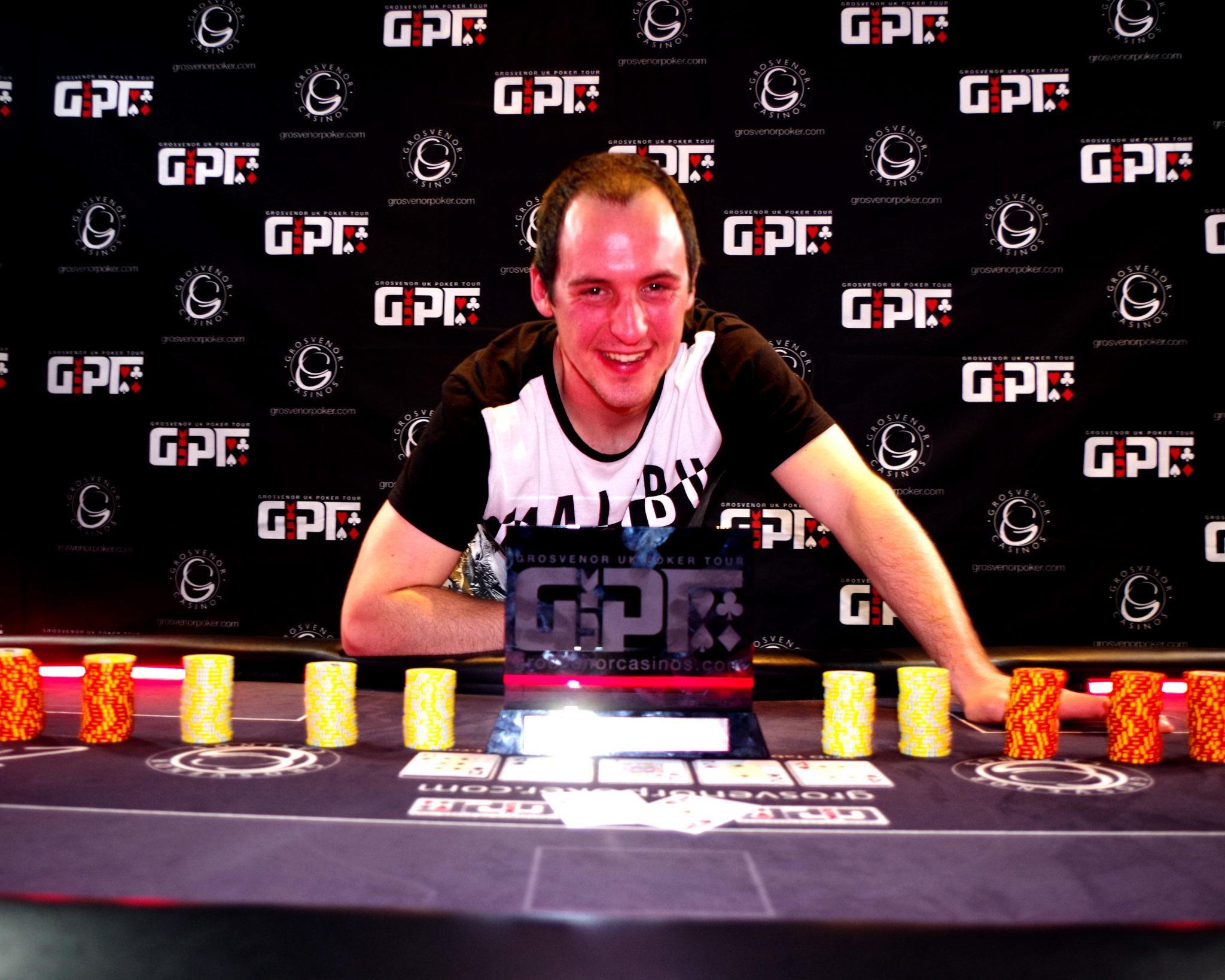 After an action packed and hotly contested week of poker, the Cardiff GUKPT trophy will be staying in Wales, in the hands of a very worthy winner – Julian Davies! Fireman Julian has been playing poker for 10 years and in his final interview with Phil ‘Tower’ Heald he was evidently over-whelmed with his first major win. Julian needed every year of that experience as he found himself against a fiercely tough opponent as the Main Event came down to its final 2 players, UK young gun Owain Carey. Carey is a regular on the poker circuit who has racked up some impressive results in recent years both live and online and who would have loved to add his first GUKPT title to that list.

A total of 171 players took part in the £550 buy-in, £100,000 guaranteed Main Event which meant £14,500 was added by Grosvenor Casinos as extra value for all players taking part. It will always be a challenge to meet a large guarantee whilst the WSOP in Las Vegas is taking place and Grosvenor Casinos would like to take this opportunity to thank all of the players for taking part and supporting the event. The GUKPT prides itself in offering huge guarantees and the lowest registration fee in the business. These, amongst others, are the reasons why the GUKPT is the longest running Poker Tour in the U.K!

Players who also featured on the GUKPT Cardiff final table included bank worker Joseph Keegan, 23, who finished 3rd for £12,500 making it his best cash to date. Dance teacher Joanne Ramsden from Plymouth who finished 4th after running her pocket 4’s head on in to Julian’s Aces. Joanne is starting to make a name for herself on the U.K Poker circuit after narrowly missing out on the final of the UKSPC earlier this year and also finished 3rd in the last GUKPT she played back in 2012 when she was 7 months pregnant! 52 year Rais Khan has been playing for 15 years and GUKPT Cardiff was his GUKPT debut. Khan won his £550 GUKPT Seat in a live satellite at Grosvenor Casino Cardiff therefore turning a small investment in to £5,800 after finishing 5th. 8th and 9th places were both filled with local Cardiff players, Greg Barratt and Kyle Hyman, winning £2,800 and £2,500 respectively.

The GUKPT tour will next be in Reading from 21st to 28th June. For all information on the GUKPT Reading please click here. As ever we welcome all poker enthusiasts from around the UK and from further afield to take part in the £100,000 guaranteed Main Event as well as the many side events on offer. Players can win their £550 seat in one of the many online and live satellites on offer which are running now.

Grosvenor Casinos have also released details of the 2015 Goliath which will take place from 8th to 16th August at Grosvenor Casino Coventry and the Ricoh Arena. This record breaking £250,000 guaranteed (£100+20 buy-in) Main Event usually attracts over 3,000 runners and is regarded as one of the most fun event on the UK Poker calendar! Grosvenor Casinos are thrilled to announce satellites are now running on www.grosvenorpoker.com – for all details please click here.