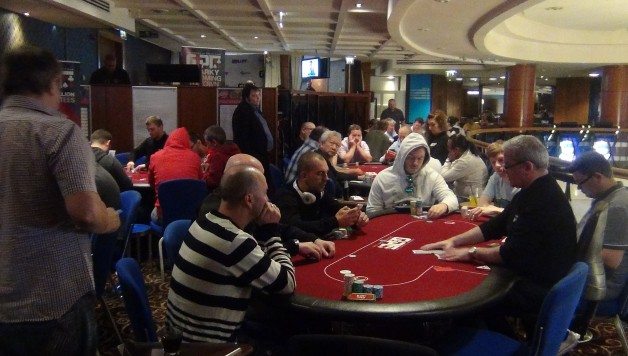 It’s been another fantastic days poker here in Leeds. The day started with 76, there wasn’t the madness we expected as it was steady all the way through, losing on average 6 players per level. Play quietened down a lot as we got down to three tables, four off the money it became very tight.

The very unfortunate bubble player was Renee Xie. Getting her ACES cracked by the KINGS of Jim Gardner who rivered a King! Very unlucky as Renee left empty handed.

Michael Howard who is a former employee of this casino held the chip lead for most of the day, but he finished the day in 5th place out of 16. The chip leader leading the 16 troops back tomorrow will be Martin Paul who has a huge stack of 935,000!! Full chip counts are…

We will be back tomorrow for a noon start. With the live stream beginning at 12:25pm. So I hope you can join us then to see who takes down the GukPT Leeds Main Event.

Play has just finished as the players bag up their chips. Chip leader will be Martin Paul who has close to a million chips!!

Ben Turnstill has drawn a four.

Four more hands then we will be done for the night.

giving Martin a flush draw and a straight draw!

The turn card completes the flush for Martin as it comes

The river card the meaningless

As I was typing up the last two hands we get three exits from the tables. We lose…

, Dan picks up top pair, but still needs to improve to win the hand, Jamie has a flush draw taking away one of Dans outs.

I get to the table as the board reads

for the nuts!! Craig shows

and is drawing to just three outs for a split pot.

With that hand Willie is up to around 620,000 and takes the chip lead.

The players are back as we begin the last level of the day.

Theodoros Drekolias gets his 65,000 stack all in blind on blind against Ken Usher.

which is in great shape against the

There is a lot of short stacks out of the 23 players. So we should see a flurry of exits now.

The first player in the money is Francisco Garcia, he is now on his way to the cash desk to collect £1,050.

Renee Xie moves all in for her 40,000 stack, it comes to Jim Gardner in the big blind who makes the call! Renee is at risk as the cards are tabled.

giving Jim the flush draw. The other two tables all come over to watch as the turn card is dealt.

, her aces are still ahead.

The turn card is Red, but its

The only remaining woman in the tournament Renee Xie heads out in 24th place.

Everyone else is now in the money.

With the elimination of Mike Thomas we are now down to 24 players.

Hand for hand in play as we are on the bubble for the money.

I get to the table as Mike ‘Ziggy’ Thomas is pretty tilted as Dena & Nicki count the stacks of him and Ben Turnstill.

On a board of

infront of him for the straight. Mike I am told had pocket Kings and all the money went in pre flop!!

The river gave him a straight which was good for the 300k pot!

Very unlucky for Mike as he heads out in 25th place.

The blinds increase as we begin level 17.

On a flop of

. Craig moves all in putting John to the test and he snap calls for the rest of his chips.

for second pair with the nut flush draw. John shows

for an over pair….

We lose John Stanley in sick fashion. We are now just two off the money.

You can feel the tension in the room as we are down to just 26 players on 3 tables. For the first time ever all the players are in the same room.

It’s all become very tight now as we approach the money which you would expect. No one wants to make a mistake which could cost them the chance to cash.

Two exits from around the tables as we are now three off the money.

Those that won’t be making the money are Safdar Pervez & Ashley Locker (below).

Jim Gardner was down to just two big blinds before he is now up to 40,000. So ten big blinds, he is still short stack.

His most recent double up he got it all in with

The board ran out

Broadway for Jim which gives him more room to grind with.

The blinds increase as we begin level 16.

, bet, raise, all in, all in, tank, all in!!! Creating a huge three way all in!! David Gent the third player to move all in!

for the over pair
Mark Evans

for the flopped nuts straight

David Mallory gets his 15 big all in pre with

Martin says “please not on the river” Not realising that David is drawing dead.

The river is a meaningless

The set is good for Martin to add nicely to his stack, we lose David Mallory from the tournament.

The last four exits from around the tables as we lose

I get to the table as  the flop reads

with around 15,000 in the middle. Alan McLean & Craig Dawson are the two players involved in the hand. As I turn up the cards are already on their backs as Craig is all in for his 80,000 stack.

for bottom set, Craig is drawing thin with

Craig hits runner runner for the flush to get the 175,000 pot. Alan is left with just 2,000 chip and is eliminated from the tournament two hands later.

The blinds increase as we begin level 15.

We lose Michael Finan from the tables. So unfortunately none of the Finans will be making the money as his wife was knocked out earlier.

With his elimination we are now down to our final four tables, just 13 players off the money.

Two exits from the tables as we lose Robert Norris & Darren Hickman.

The action is folded round to Dean Hutchinson in the small blind who moves all in for his 24,000 stack, Paul Chivers makes the call from the big blind.

and is in terrible shape against the

Paul takes the pot with Ace high and now has 70,000. We lose Dean Hutchinson from the tournament.

All is quiet at the tables during the last 20 minutes. I can see a lot players tightening up as we approach the money bubble.

40 players remaining with 23 getting paid.

One of the nicest guys you’ll ever meet John Miller has just been eliminated from the tournament. I missed the hand but John stood up smiled. Looked at me and said “I didn’t have anything all day, then moved all in at the right time, which happened to be the wrong time”.

It was good to see John again and I’m sure we will see him in Blackpool for Leg 10 of the season.

Jamie O’Connor makes it 4,800 to play, the action comes to Les Kearney in the small blind who moves all in for just 15,000. Jamie makes the call.

Les will need to improve to survive tabling

Trips for Les as he doubles up to 32,000 which is still under a third of the average.

The players are back, as we begin level 14.

Down to 43 players now as we lose Norman Reynolds, Jack O’Neill & Guy Taylor (below).

David Mallory moves all in for his last 20,000 chips and is called by Harry Law. Everyone else gets out of the way and the cards are tabled.

anf will need to find an Ace against the

, always a sweat as David picks up a flush draw.

David hits runner runner flush to double up to 45,000.

Four more eliminations from the field as we lose….

The blinds increase as we begin level 13.

Nino Tachajian moves his short stack of 20,000 all in and is called by Adam Chadwick.

Nino looks good for a double up tabling

as Nino hit top pair, but Adam swaps his three outs for four. Any ten would no give him a straight.

!! Adam does hit broadway on the turn.

Nino leave the tournament just how he has played it for the last couple of days, with a huge smile on his face.

Michael Howard is huge chip leader of the tournament after two and a half levels of play here today. He has a massive stack of 325,000 which is four times the average. I am guessing he is the man who busted Alan Peers who had 140,000 at one point, but is now out.

Mark Evans opens, Alex Spencer moves all in for his short stack of 7,000 and when the action comes back to Mark he makes the call for not much more.

Alex has one over tabling

The tens hold for Mark who adds to his stack.

We lose UKSPC Winner Alex Spencer from the field as we are down to 51 players.

Some exits from before the break as we lose David Jones, Shaika Vodka & Alan Peers.

The players are back seated as we begin level 12.

Some more exits as we are down to 58 players. The last three players to bust out are Jamie Sykes,William Delaney & Melonie Finan.

Exits from around the tables as we lose Bradley Cowling, Alex Tuzinkiewicz, Andrew Hills (below) & Shaun Farrell.

Mark James moves all in for his 25,000 stack, Liam Crawford also moves all in! Everyone else gets out of the way and the cards re tabled…

Mark is in bad shape with

We lose Mark James from the tournament as we are down to 63 players.

Husband and Wife, Michael Finan & Melonie Finan are sat directly next to each other. That’s one step ahead of yesterday when they were on the same table.

They are both playing with big smiles on their faces but both need help as they are short stacked. Melonie has 13,000 while Michael has 35,000.

Table three looks like the table of death so far. I’ve just been handed three cards from table three.

They are the ID cards of Andew Lambert, Mark Worden & Michael Jackson (below).

The blinds increase as we begin level number 11.

Two more exits from the tables as we lose Jeff Kimber (below) & Bruce Atkinson.

The live stream for Day 2 is now up and running. Watch it HERE!!!!

David Gent makes it 2,000 to play pre flop, Keith Hawkins moves all in for his 15,000 stack and David makes the call.

It’s a coinflip as David tables

He leaves his seat as the river comes a meaningless

15 minutes into play here in Leeds and we have already lost our first player from the field. That player is Stuart Costa.

The first level of day two is always a manic one and I fully expect us to lose at least 10 players.

The cards are in the air and Day 2 is now underway!!

The players have just been called in to take their seats and unbag their chips, we should be underway bang on time at 1pm.

Welcome back to the G Casino here in Leeds for Day 2 of the main event. There are 76 players coming back today from the 228 that entered. They are led by Martin Hampton who had a fantastic day yesterday finishing with 222,700.

The live blog will be running again today but you can watch out feature with hole cards also. The live stream will be beginning today at 1:25pm.

Play will begin today from 1pm.