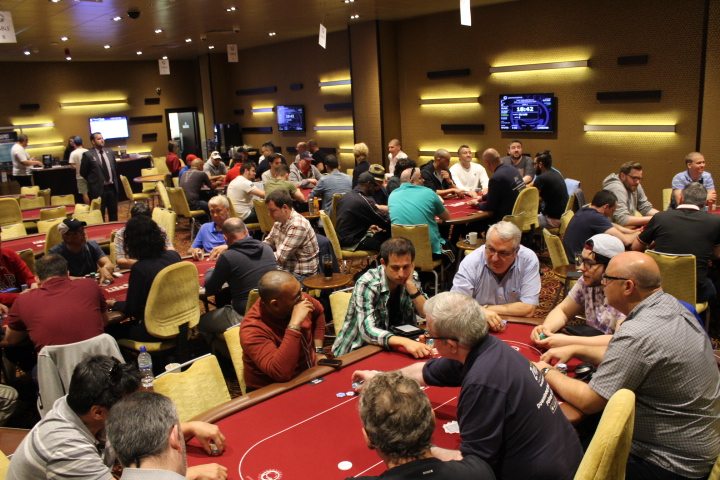 Welcome to  day 1b of the main event here in Reading. 126 players are needed to hit the £100,000 Guaranteed prize pool. Late registration and re-entries are permitted for the first 6 levels, so there is plenty of time to make it to the fantastic Grosvenor Casino and take part in leg 5.

Just ten minutes until we kick off Day 1b here in Reading, at the moment there are just 57 entries, so a strong chance of their being overlay here for Leg 5.

60 entries to start the day.

Albert Sapiano, who final tabled this event last season has just been all in, within the first 20 minutes of sitting down..

He shouts me over to say “I’m about to re-enter”. After a clock was called on Adam Bowen, he folds…

Stephen Weatherall is the other man in the hand and tables

“Ooh I have a chance” he says. The

means Alberts doubles up, but only back to starting stack!!!

Table 9 will be an active table to watch…

The blinds increase as we begin the second level of the day.

Good to see the players hitting social media, to let us know how they are getting on.

After a spurt of late registrations, the numbers have increased to 109 today. nearly doubling the numbers from the start already.

With just under half an hour to go until the first break, we think the guarantee will be surpassed before the dinner break at the end of level 4…

A few eliminations as we are just about at the first break of the day….

A few exits at the start of level 3 of the day..

A few more exits as we are halfway through level 3..

A few counts from the room….

As we head towards the buffet break. A few counts from the room..

The clock ticks to 00

which means the players will now be taking their 1 hour dinner break.

The players are now back seated as we begin level number 5.

A trio of exits early in level 5.

Three more down as more people buy in or re-enter.

We get to the table as there is already 9,000 in the middle as James Akenhead & Will Kassouf go to the flop which comes

Akenhead is first to act and he leads out for 6500, which after some classic Kassouf speech play, is called.

Akenhead slows down and checks to Kassouf who after more talking, decides to check back.

The river card pairs the board and comes a four diamonds,

James is first to show as he was the last aggressor, he tables

for two pair which is good to take the pot.

A few counts from around the room….

On a fop of

Nick Stylianou gets his last 7,000 in the middle holding

for top pair but runs into James Barney holding

for the flopped flush!! Nick will now need runner runner to survive.

We lose Nick Stylianou from the field, although he has the chance to re-enter if he wishes for another 80 minutes.

The blinds increase again as the players begin the last level of buy ins.

The latest exits, but still 123 remain as they all re-enter…

flop she has been called by Chandra Khajuria.

for second pair and a gut shot straight draw.

Sick for Gladys as she is eliminated as Chandra rivers a boat.

Gladys now has 40 minutes to decided whether she would like to re-enter.

Kenneth Midgley moves all in for his 7,000 stack and is called by James Akenhead.

Kenneth Midgley heads out of the tournament.

The latest exits as we hit the break at the end of level 6..

Break time now for the players as they take another 15 minutes.

After the break we will be able to tell you how many runners we have had in total in Reading.

No more re-entries or late reg.

Total prize pool unconfirmed at the moment is £124,000

Registration has now closed for Leg 5 of the 2015 tour in Reading.

There have been a huge 174 entries in total for just today, meaning the total over the two days is 248!! Creating a £124,000 prizepool for the players to play for.

The feature table looking amazing as always will be in full operation tomorrow.

The blinds increase as we begin level eight.

A few counts from around the room…

The latest exits are :-

Teelasak Meeluksom opens the action to 1800, Ellie Biessek moves all in for her stak of 5600, when the action comes back to Teelasak he reluctantly makes the call.

giving both players a straight draw.

giving Teelasak a pair but Ellie the nuts straight. She now has a lock on the hand.

The river is meaningless but comes another Jack,

Ellie gets a much needed double up to 13,000 but she still has work to do with a level and a half to go.

Leon Mills opens to 1400 and is called in two spots before Eric Chen moves all in for his stack of just over 10,000. Leon gets out of the way as does one of the other players before Robert Dove makes the call.

The board comes out

No sweats for Eric as he flops top pair which is good enough to take the pot, doubling to 26,000.

We get to the table as Neil Walker is all in for his last 4,000 against Will Kassouf who has re-shipped all in, everyone else has folded and the two players expose their cards…

giving Neil the lead in the hand with top pair.

Will shouts for an “Accceeee!!”

The turn card comes exactly that

Will then shouts for a “Brickkkk”

Again he gets what he asks for as the river comes

Kassouf has got the art of calling for cards down to a tee, taking the pot he now has 20,000.

Unfortunate for Neil as he heads out just before the last break of the day.

Last break for the players now as they take 15 minutes.

The final level of the day..

The latest eliminations from the start of level 9..

More exits from the final level of the day..

We join the table mid way through a pre flop raising war between James Akenhead and Cardiff winner Julian Davies.

It looks like it’s a four bet from Julian to 8800, which James has then five bet it to 14,350. Julian is deep in the tank as we get to the table and after a few minutes, he moves all in!! James snaps him off to create a huge pot!!

and will be looking for an Ace against the

as Julian gets instant service, James now just has one out.

Julian takes the huge pot doubling to around 94,000, a long way to go but could he be the first player ever to go back to back? He’ll have a top 10 stack tomorrow, so who knows.

James Akenhead is down to dust and eliminated the very next hand.

A six has been chosen so six more hands and we are done for the night.

The players have now finished for the night. They are bagging and tagging their chips which they will see again tomorrow.

We will have full counts with you as soon as possible.

Wow! Well what a manic day it has been. After nine levels we can all now breath… It’s been an unreal turn out for Day 1b, a massive 177 entries to create a prizepool of £124,000 in total.

The chips are now all in bags and we have finished the day with 64 players, that join the 25 from yesterday to come back tomorrow for Day 2.

Vaidas Siriunas leads the players from Day 1b. Full chip counts are….

We will be back tomorrow with the live stream from 1:25pm, with the coverage beginning at 12:30pm. So I hope you join us then.