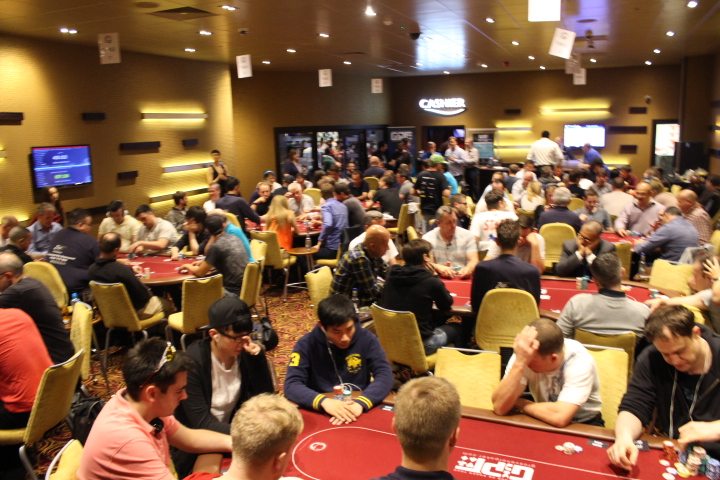 Good afternoon and welcome back to the Grosvenor casino in Reading for the second day of Leg 5 of the GUKPT Tour. A great turnout of 248 entries came and to stump up the £500 entry fee over the two starting days, creating a prizepool of £124,000 for the players to play for. Of those 248 we have 88 players coming back today for Day 2, where we will be playing another nine levels.

Vaidas Siriunas who already has a GUKPT Main under his belt leads the way with 166,000.

Play will begin at 1pm, with our live stream beginning at 1:25pm.

I hope you join us all day and interact with The Tower on Facebook and in the chat box of the live stream.

The players have just been called in to take their seats. We should be underway within 10 minutes.

The cards are in the air as we begin day two.

Andrew Seabright makes it 2,000 to play, Justinas Pactauskas calls. James Mitchell then enters the pot three betting to 5700. The action comes to back to Andrew who checks James stack before moving all in, Justinas folds and James calls for his tournament life.

The dealer puts out

on the turn as Andrew turns a two outer!! James takes one more mouth of bacon before looking up to see the bad news.

Champion from Edinburgh James Mitchell is eliminated from the tournament as Andrew Seabright (below) takes the pot.

As always, Day two is a little hectic with quite a few players busting early, another five players hit the rail as we lose…

The blinds increase as we begin level 11.

More eliminations from the Day Two field as we lose…

The unsung heroes of the tour, the dealers and floor staff.

We get to the table on a flop of

there is around 9,000 in the middle when Justinas Pactauskas moves all in for his 15,000 stack. Renee goes deep into the tank, only playing around 28,000 herself. She then makes the call.

for the over pair.

as Justinas hits one of his six outs.

The players are back seated as we begin level 12.

David Crane moves all in for his stack of 15,000, Raul Martinez calls on the button. The action comes to Sidney Oppong in the big blind who moves all in for 100,000!! Raul makes the call and the cards go on their backs for the chip lead pot.

Raul has the best of it with

as Sidney takes a huge lead in the hand flopping a set!!

Sidney takes the pot and with that he becomes the chip leader, doubling to 220,000.

Raul is distraught as he loses the huge pot, but he still has just over 100,000.

David is eliminated from the tournament.

More bust outs from the tables as the players are still dropping like flies. We lose…

The blinds increase as we begin level 12.

Mark English and James Martin get their short stacks all in.

Mark has the best of it holding

as James flops a flush draw.

Mark can now breath as it comes brick brick He takes the pot doubling to just short of 60,000.

James is left with 500 and is eliminated the very next hand.

Aaron Biggs gets his short stack of 30,000 all in pre flop holding

The queens hold for Aaron who gets a much needed double up to 65,000.

Stack are really starting to build now as there are 45 players remaining on five tables.

One table in particular has a lot of chips on it, Lee Mulligan, Andrey Veselov are both well over the 100,000 average and Martin Bader, Sidney Oppong & Martin Bader are all approaching the 200,000 mark.

The most recent bust outs of players who will not be making the dinner break which is in 15 minutes….

Dinner break now for the players as they take 45 minutes to get some free food.

The players are now back seated as we begin level number 14.

Chris Cooper gets it all in pre flop holding

Chris holds his breath as his tournament life is now in the hands of the poker gods, well the dealer who burns and brings out a flop of

Another burn card from the dealer, then the turn card which is

Just two cards now will send Chris to the door, the river is not one of the as it comes

Alex Bounsall gets his 40,000 stack all in pre flop and is called by Julian Davies.

giving Julian a lock on the hand.

The river card a meaningless

The blinds increase as we begin level number 15.

Down to four tables now as we lose Ji Ye Zhang (below) & Gavin Kan.

Gladys Long who has been grinding a short stack for some time has just been eliminated. Her

not able to beat the

of Martin Bader as the board ran out

The nut flush for Martin as he eliminates Gladys.

Martin Bader has just been eliminated by Raul MArtinez.

board, I think the money either went in on the flop or turn but Raul got there with his

We lose Martin Bader from the tournament.

The players are back seated as we begin level number 16.

The most uneventful start to a level so far today as in the first 25 minutes of this level we are yet to lose a single player.

We should see the players playing a little bit tighter now as we approach the money bubble.

Two exits from the four tables of play as we lose Kelly Saxby & Matt Davenport.

The last remaining woman in the tournament Amy Mahrenholz moves all in for her stack of around 60,000 and is called by Andrew Seabright.

Amy is in bad shape tabling

A good run for Amy but very unlucky as she busts in 30th place, ten off the money.

The blinds increase for the 28 players that we have remaining.

Ben Lloyd moves his ten bigs all in over an open from Andrey Veselov and when the action comes back to him Andrey makes the quick call.

and has live cards against the

Andrey takes the pot as Ben busts in 28th place, with his elimination we are now down to the final three tables.

While the hand above was happening we lose Charlie Combes on an other table, so we’re down to 26 players.

Two exits from the field as we lose Phil Corion & Lee Mulligan.

Hui Jin makes it 13,000 to play, Mark English moves all in for his stack of around 80,000. Ed Thomas to Marks left thinks for a few minutes, he only has 40,000 chips, he always moves all in!! Hui gets out of the way and the two players table their cards…

The Ace-king high is good for Mark to take the pot.

We lose Ed Thomas as we are down to 23 players.

We missed the hand but Sidney Oppong has just been eliminated in 23rd place.

With his elimination we are now down to just 22 players, two off the money, one off the bubble!!

The players are now back seated as we begin the last level of the day.

Peter Arrigoni moves all in for his 45,000 stack, Raul Martinez also moves all in!! Ian Francis gets out of the way and the cards are tabled.

, cross bar for Peter as he is eliminated in 22nd place.

21 players now remaining which means we are hand for hand on the bubble!!

for the nut flush!!

We lose Nathan on the bubble as he loses the huge hand against Andrey.

Andrey is now up to around 700,000 while Nathan leaves empty handed.

Two exits from the field as we lose Chris Fagg & Chris Cooper. Both pick up a min cash of £1,360.

The players will now play 5 more hands before bagging up for the night.

Play has now come to a close with 17 players remaining. Full chip counts will be up with you as soon as we get them.

After another 9 levels of play here on the GUKPT tour another day is in the books. Today we started with 89 players, which is the biggest day two field we have had this year, so we knew making a final table would be close to impossible. The players seemed to fall really quick during the first four levels or so, but from around 30 players it really slowed down as we approached the money.

The bubble for once didn’t actually take that long, around 15 minutes of bubble play before Nathan Blank ran into the nuts of Andrey Veselov. Nathan left empty handed while Andrey took the chip lead. He will lead the 17 players coming back who are…

Play will begin an hour early tomorrow, so join us from 11:30am for a noon start, with the live stream beginning at 12:25pm, we will be playing down to a winner.

Who is it going to be?

Join us tomorrow to find out.