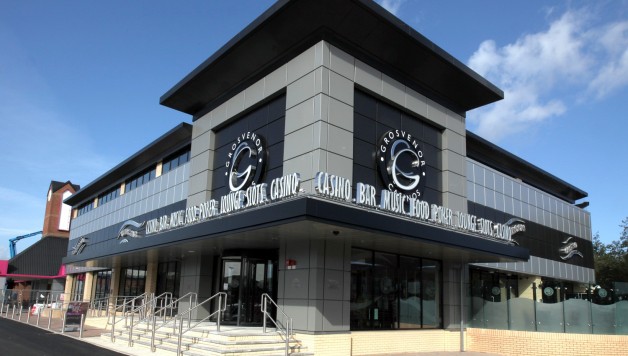 It has been a fantastic turn out here in Stockton with 116 entries. A massive improvement on the 73 we got last year, which was taken down by Alan Peers.

The nine finalists came back today, for what we thought would be a great final table and they didn’t disappoint.

Dave Maudlin (below) was the first player to be eliminated, having only come into the final with less than 4 bigs he would get it in on the second hand with 6-7 and come up against the Queens of Chris Green Smith. Dave took home £1,450 for his ninth place finish.

Chris Green-Smith (below) was our 8th player, getting it all in with K-9 on a 10–K–8 flop and running into Stephen Sung holding K-Q. Despite turning a gut shot straight draw Chris couldn’t get there, he would take home £1,740.

The other Chris at the table would leave us in 7th for £2,320, as Chris Howden pocket tens into the queens of Sung who was on a rampage!!

After chips were passed round the table for a while we would lose John Bousfield in 6th position, Bouseys A-10 running into the J-J of Stephen Sung, he flopped a set and eliminated another player. Sixth place was good for £2,900.

WSOP Bracelet Winner was the man to fall in 5th place. All in on a flop of 9–8–10 with Q-10 for top pair and a gut shot straight draw and running into the 6-7 of Neil Raine who started to take control of the table.

Tom Hall who made the last final in Didsbury went one better this time finishing in 4th place. His A-K could not overcome the pocket Jacks of Dave Collins who cashed in his one time.

Stephen Sung busted in third place after being very short stacked he got his chips in with pocket Kings, it was good against the A-Q of Neil until the ACE showed up on the turn. Stephen took home £7,830 for his efforts.

We went into heads up really close in chips, Dave Collins just having the chip lead. It was a very interesting battle to watch as Neil went from super aggressive to a more limping and small pot controlling style. He tried to grind Dave down but for every 4 small pots he would win, Dave would then win a big one. After about 90 minutes of play Dave made a shove on a board of 7–10–K–2 board, this time Neil had it with a top pair and flush draw as back up, it would prove good again Daves third pair.

A fantastic performance from Dave Collins who came into today eight in chips. He cashes for £12,470 for second place which to my knowledge is his biggest cash to date.

All the praise has to go to our GukPT Stockton Main Event Winner 2013 Neil Raine who came into the day as chip leader and to be honest, he never looked like losing the tournament. With his controlled aggressive style and piercing stare he is really hard to play against and when Lawrence Gosney who has bags of experience says “That kid can really play tournament poker” you know its true. Well Done to Neil. He takes a cheque home for £17,960.

That’s it for another Leg of the GukPT. We will be back in three weeks for Leg Four in Portsmouth. I hope you join us then.

Dave makes it 50,000 to play from the button and is called by Neil in the big blind.

The turn card is the two of spades.

The river card is another King.

Neil limps on the button and Dave then makes it 60,000 total from the blinds. Neil calls.

Dave tables A-K for ace high, Neil shows A-2 for bottom pair which is good enough to take the pot.

The action comes back to Dave who counts his stacka few times before four betting to 330,000.

Neil has a decision on his hands, giving Dave that piercing stare he possesses, he checks his cards again then gives it up.

Dave gets his four bet through to take the pot.

Dave limps the button and Neil checks in the big blind.

The river card is a three, both players check.

Dave is first to show he tables 9-5 for a pair of fives.

Neil tables K-8 for top pair, which is good enough to take another pot.

It should be an interesting battle.

Steve Sung limps on the button, Neil Raine raises from the small blind, Stephen moves all in and Neil makes the call…

Stephen is in great shape for a double up tabling KINGS!!
Neil has three outs as he shows A-Q. A cooler three handed.

The turn card comes an ACE!!!!

Very unlucky for Stephen Sung who is eliminated in third place for £7,830.

Neil then comes in for a four bet to 125,000, Dave instantly moves all in and Neil quickly folds.

Dave seems to be getting the better of the exchanges between the two players as he shows the eight of spades.

Queen high is good for Stephen as he doubles to 350,000. He is still the short stack by some distance.

Neil makes it 32,000 to play and is called by both players in the blinds.

The two players check to Neil who bets 37,000, both players call to see the turn card.

Dave then leads out for 60,000, Stephen gets out of the way and Neil calls.

The river card comes the Jack of spades.

Dave leads out for a second time, making it 100,000 to play, Neil doesn’t take long before just flat calling.

Dave tables 9-10 of spades for a flush to take the huge pot.

Neil flashes me two red eights for a flopped set!!

Stephen Sung limps on the button, Neil Raine then makes it 45,000 to play from the small blind.

Action comes to Dave Collins in the big blind who three bets to 100,000. Stephen quickly passes as does Neil.

Neil Raine over bets the river on a double paired board and gets paid by Stephen Sung who shows an Ace.

Players are back seated as we begin level 21.

The players are now on a 15 minute break.

Action comes back to Dave on the button, he four bets to 135,000. Stephen quickly gets out of the way. Neil thinks for a minute or so before checking his cards twice and giving it up. Dave gets his four bet through to take the pot.

Although as they are playing for big money you would expect things to be a little cagey.

We still continue with three players.

In the first 15 minutes of this level it has been eventful with most of the pots being really small.

Neil has retaken his chip lead winning a nice pot off Dave Collins.

The next player to be eliminated will receive £7,830.

Players are back seated as we begin level 20.

Break Time for the 3 remaining players as they take a quick five minutes.

Stephen Sung makes it 30,000 to play from the small blind, Neil Raine three bets the big blind to 70,000 and Sung quickly calls.

The flop comes 3d–Jh–10d. Both players check the flop.

The turn card comes the four of diamonds.

Stephen checks to Neil, who bets 55,000 which Stephen calls.

The river card comes a two.

Stephen checks for the third time, Neil thinks for a minute and then checks announcing Ace high, he tabbles A-K.

Dave Collins opens from the button, Tom Hall three bets from the big blind, Dave moves in and Tom makes the call, as quick as a flash…

The turn card is a 5, changing nothing.

Dave again says “One time for me dealer…”

That’s Daves one time been cashed in he will not be allowed another.

The stacks are counted and he just has Tom covered.

Neil leads out for 30,000, Lawrence moves all in and Neil quickly makes the calls.

Lawrence tables Q-10 for top pair and a gut shot.

Neil shows 6-7 for the bottom end of the straight.

The turn card comes a 5.

The river card another 9.

Neil Raine makes it 20,000 to play and is called by Stephen Sung & Lawrence Gosney.

Stephen leads out for 20,000, Neil calls as does Lawrence.

The turn card is the three of hearts.

The river card is the four of clubs.

Stephen checks to Neil who thinks for a minute or two before checking back.

Stephen tables J-8 of hearts for the flush which is good enough to take the pot as Neil mucks his hand.

Players are now on a 15 minute break.

Stephen Sung makes it 28,000 to play, Tom Hall thinks for a minute before moving all in, action comes back to Stephen who quickly calls…

It’s a classic race as Tom tables A-K against the J-J of Stephen.

Stephen leads out for 95,000, Neil checks his cards once more and flicks them into the middle.