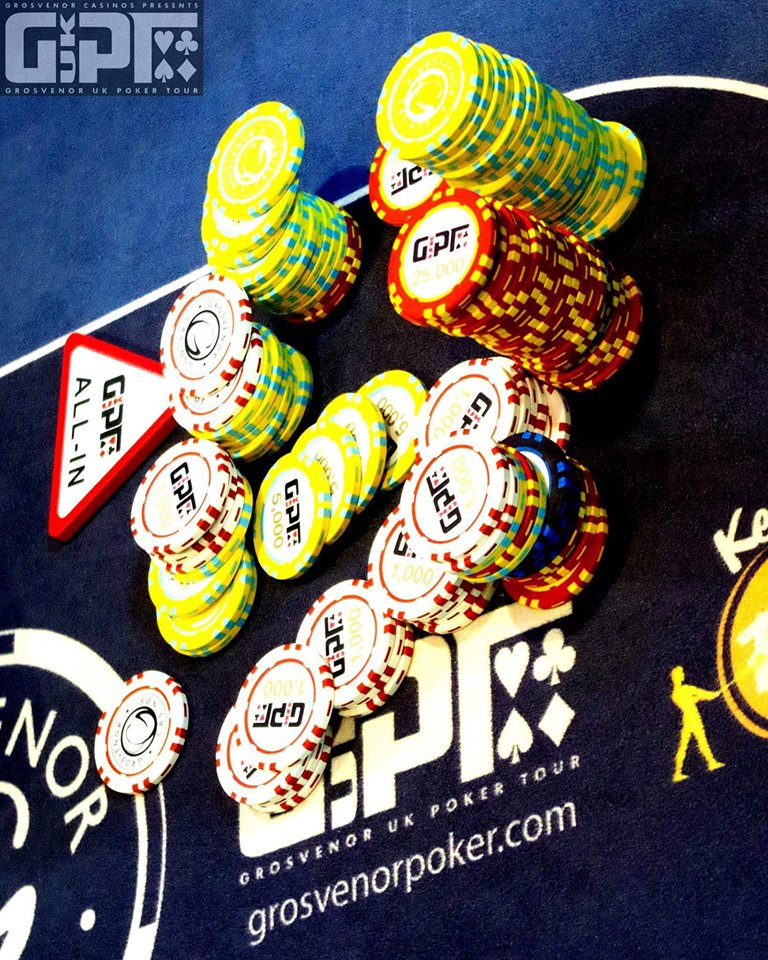 After nine levels of play another Day one on the GUKPT Tour is now in the books. It’s been another great day in London with 148 entries in total over the six levels of late registration. Of those entries we have been left with 47 players who have made it to Day two, which will take place on Saturday.

Tina Bandyle has held the chip lead since around level 5 and finishes on top of the players who have made it through the day, full chip counts of those players are:

We will be back tomorrow for more of the same, where we’ll play another nine levels and another six levels of late registration. The tournament starts at 1pm in the room but coverage begins at 12:30pm. Join us then.

Play has now finished on all tables as players bag and tag.

We will have full chip counts up with you as soon as possible.

The clock has been paused with ten minutes remaining.

Players will now play five hands before bagging up for the night.

Jon Kyte has just got his last ten bigs all in holding Ace-Jack and ran into a player holding Ace-King.

No help for Jon and he heads out of the tournament.

Maybe we could see him tomorrow as Day 1b takes place from 1pm, with players allowed one entry and two re-entries. 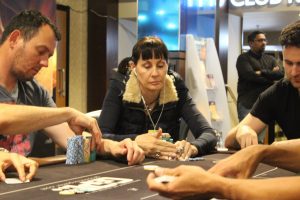 Break time now for the players as they take their last break of the day before beginning the final level.

We have a facebook competition on our Facebook page for the chance for people to win a £30 or £5 token.

It’s completely free to enter and you can find it HERE!!!

Fresh off her 3rd place finish in the mini main event Tina Bandyle is the chip leader heading into the last 75 minutes of play. 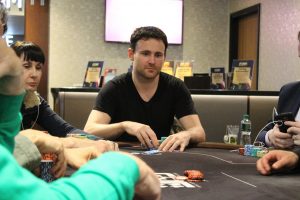 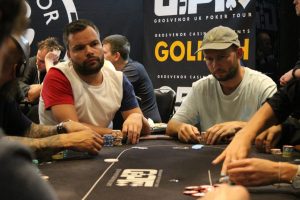 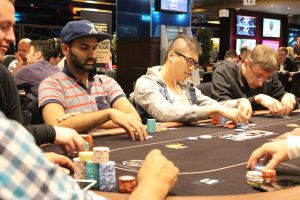 Registration has now closed here on Day 1a of the GUKPT London Main Event.

It’s been another great turnout with 148 entries over the six levels of late registration, which is exactly the same number as last year. 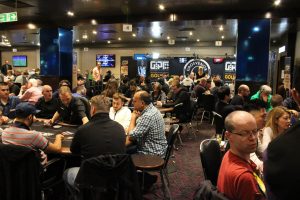 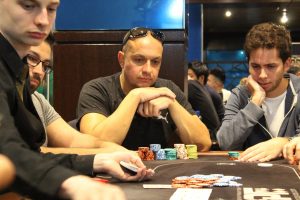 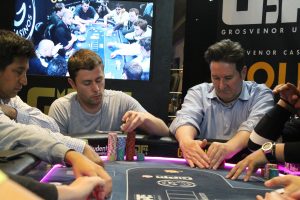 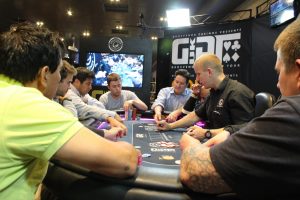 The players are back seated as we begin level number seven.

This is the last level for players to buy in or re-enter, so we might see some gamble from the players who have short stacks.

After a wander round the tables, we heard various players asking how many re-entries they were allowed, so we could lose a few players going into the last ten minutes of this level.

The entries keep coming through the door and the players who bust keep re-entering as the numbers keep climbing.

As we type there have been 140 entries in total for Day 1a in The Poker Room.

Some chip counts from the tournament tables

The blinds increase as we begin level number 6.

The last level for entries and re-entries. 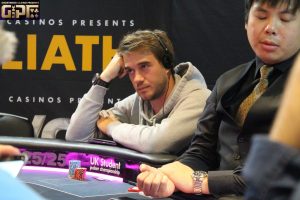 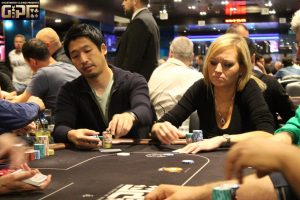 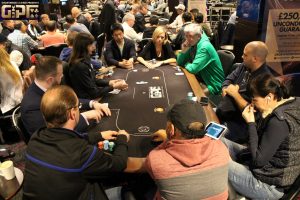 Some exits from the tables as we lose:

The players are back seated from dinner as we begin level number 5.

The players are dropping like flies and then jumping back into the tournament to re-enter.

We have already had 15 re-entries in the first three and a half levels.

The most recent eliminations from the tables were:

Alex Zervos who finished runner up to Ben Winsor at the Grand Final in 2015, is short stacked with 5325 and gets it all in holding

meaning Alex needs to dodge a queen, jack or ten as his opponent picks up a straight draw.

The turn card pairs the board coming

meaning the other player adds aces to his list of outs….

Alex dodges the outs, rivers the full house and doubles up to half starting stack as he now has 10,000. 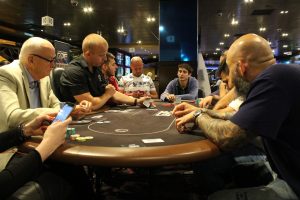 A few pics from the tables 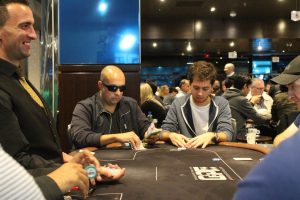 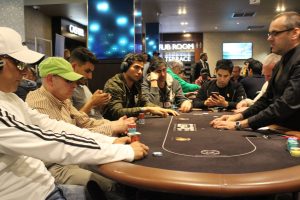 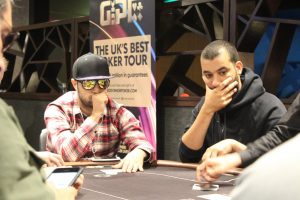 The blinds increase as we begin level number four.

Some more exits from the tables here during level number three. The players listed below are now longer in the tournament:

The GUKPT side event in London  tonight is an Omaha Event!!

Some more exits from the field as we lose:

The players are back seated as we begin level number three.

Break time now for the players as they take 15 minutes for the first time today. 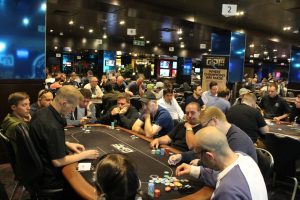 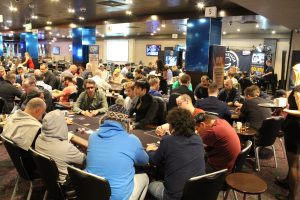 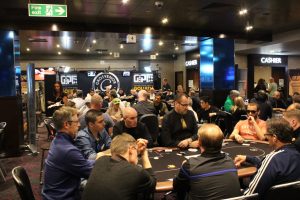 A few more exits from the field here on Day 1a as we lose Mar Wardum & Will Young.

Both players take up their option to re-enter as total entries for Day 1a increases to 84.

All is quiet during the second level of play here on Day 1a.

Not much to speak of during this level.

The numbers are still increasing as players continue to enter the tournament, at the moment we have 79 entries.

The blinds increase for the first time today as we begin level number 2.

67 entries so far today, with late registration open for the first six levels of play.

The live stream is now up and running on a thirty minute delay with all hole cards shown.

You can watch all the action take place HERE!!! 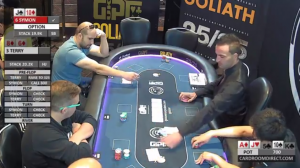 Level one of Day 1a and we have already lost one player. Ion Mican is the first player to exit the tournament, only half an hour into play.

He jumps straight back into the event. Buying in for another £500.

With his entry we now have 65 players so far.

Late registration is open for the first six levels of play. 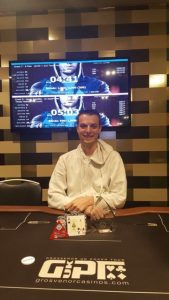 The cards are in the air as we begin the first level of play.

50 players are starting the day.

The players have just been called in to take their seats.

We will be underway within 5 minutes.

Good afternoon and welcome to The Poker Room in London for the 6th leg of the 2017 Tour. We are back in the capital for the second time this year, previously being here in January to kick off 2017.

This event is a £500 buy in with a £100,000 GTD. Day 1a takes place today and the players will play nine levels of play. Each player is allowed one entry and two re-entries per day. If they don’t make it through the day, they can always come back tomorrow for another go as we mirror what is played today on Day 1a.

Last year this event was very well attended, 419 entries in total over the two days of play, with Brett Kennedy finishing on top and taking home £45,000!! 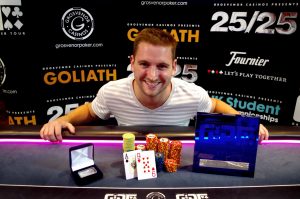 We will be here with you for the full four days of poker, bringing you live updates, pictures, chip counts and exits from the tables. The GUKPT live stream will also run for the duration of the tournament, showing you all hole cards on a thirty minute delay, with the feature table changed every 2 levels.

Today should be a great days poker which begins at 1pm.