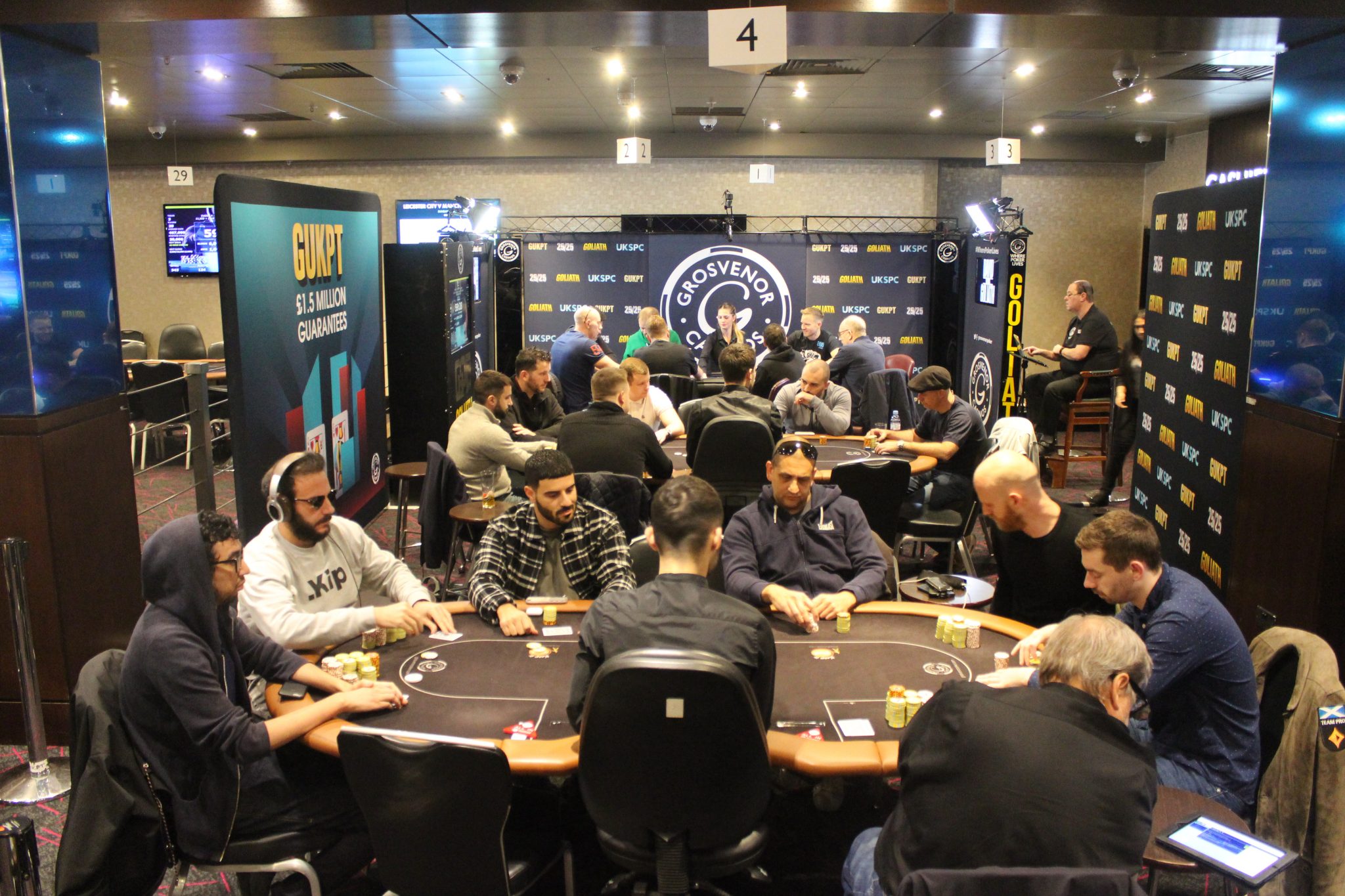 Well that’s it from GUKPT London. Leg 1 of the 13th season of the UKs longest running tour is in the histoy books.

It’s been an unbelievable turnout with 467 entries in total, the biggest EVER £1000 GUKPT Main Event!

It’s been a long day today, playing almost 13 hours of poker but we have a new champion! Commiserations goes to Alexios Zervos who has unfortunately finished runner up again! This time for £80,000!

The next GUKPT Leg will take place in Manchester during the second week of March. Join us then where we are expecting another big turnout.

Until next time, be lucky.

Alexios Zervos gets very unlucky two spots for the trophy and is left with just ten bigs.

He gets it all in holding

Flush for J.V as he takes the final hand of the tournament.

Alexios Zervos takes home £80,000 for finishing as the runner up.

Paul Siddle gets it all in with top pair and a gut shot against the two pair of Alexios.

Zack O’Sullivan moves all in for his 10 bigs and is called by J.V.

and has live caards against the

Ace on the flop then nothing silly from the dealer and we lose Zack O’Sullivan in 4th place for £45,800.

The blinds increase as we begin level 31.

Alexios is at risk for his 2.2million stack tabling

Alexios makes a flush doubling up to 4.6million, which is half the chips n play.

The players are back seated as we begin level number 30.

Average stack is 23 bigs so the tournament is shallow now. There should be some action this hand.

A deal has been done between the players, flattening the payouts.

This is the new payout:

S.B moves all in for his 9 bigs stack and is called by Alexios Zervos.

The jack plays as Alexios takes the pot and now has 2.5million.

The blinds increase as we begin the nextx level of play.

giving Zack a set and the lead.

The cards are in the air as we begin level 28.

All is very quiet on the final table with zero action to speak of.

There are 6 players remaining and they are guaranteed £14,600.

Andrew Garland has just been eliminated in 7th place for £11,500.

A great cash after Andrew had just a small blind mid way through Day 2.

A massive overlay with late registration until tonight.

Get yourself on Grosvenorpoker.com for some added value.

On a board reading

for an over pair, Chris is at risk and tables

for top pair and a flush draw.

The aces hold for Zack as he takes the pot and now has 2 million chips.

We lose our first player from the final table in Andreas Orthodoxou!

The players are back seated to begin the next level of play.

Andrew rivers top pair and will double up to just over 700k.

No action to speak of during the first level of the final table.

Players are just getting a feel for the table and hopefully they will open up when the blinds increase in a few minutes.

The final table is now underway!

9 players remaining with 45 minutes on the clock.

Break time for the players as they take 15 minutes before beginning the final.

Adel Benmessaoud moves all in for 200k and is called by Alexios Zervos.

It’s a flip as Adel tables

Flush for Alexios as he takes the pot.

Yazan Mdanat gets his last twelve big blind all in holding

and is crushed by the

Two pair for Richard as he takes the pot.

Chris Howden opens, Zack O’Sullivan three bets to a massive 400k. Chris goes to shove, but accidentally leaves 130k behind, so it’s classed as a called.

Zack moves all in and Chris quickly puts in his remaining chips.

and has been out flopped by the

of Zack who has flopped top pair.

Zack takes the pot and now has around 1.7million.

Alexios Zervos moves all in for his stack of around 340,000, Victor Ilyukhin calls off his 250k stack putting himself at risk.

Alexios makes two pair on the river to take the pot and bust Victor.

The players are back seated as we begin the next level of play.

All is quiet during the second level of today as we approach the break.

Full chip counts of the remaining players will be up with you when we take a break in 15 minutes.

It’s a coinflip as Patrick shows

The blinds increase as we begin level number 22.

Ludo gets his last 160k all in holding

Paul Siddle opens, Martin Jacobson moves all in for around 170k, Paul calls and the cards are tabled…

Steven Chandler three bet shoves his 150k stack over an open from Chris Kadji, Chris makes the call and the cards go on their backs:

The board comes down

Chris takes the pot with one pair.

Mitch Johnson gets his short stack all in holding

and is called by Chris Howden tabling

The cards are in the air as we begin Day 3.

The players have been called in to take their seats.

We should be underway in 5 minutes time.

Good morning and welcome back to The Poker Room for the third and final day of the tournament.

From the 467 entries we have just 20 players making their way back today to play down to a winner!

Play begins at 12pm today and we’re looking forward to what should be a great day!