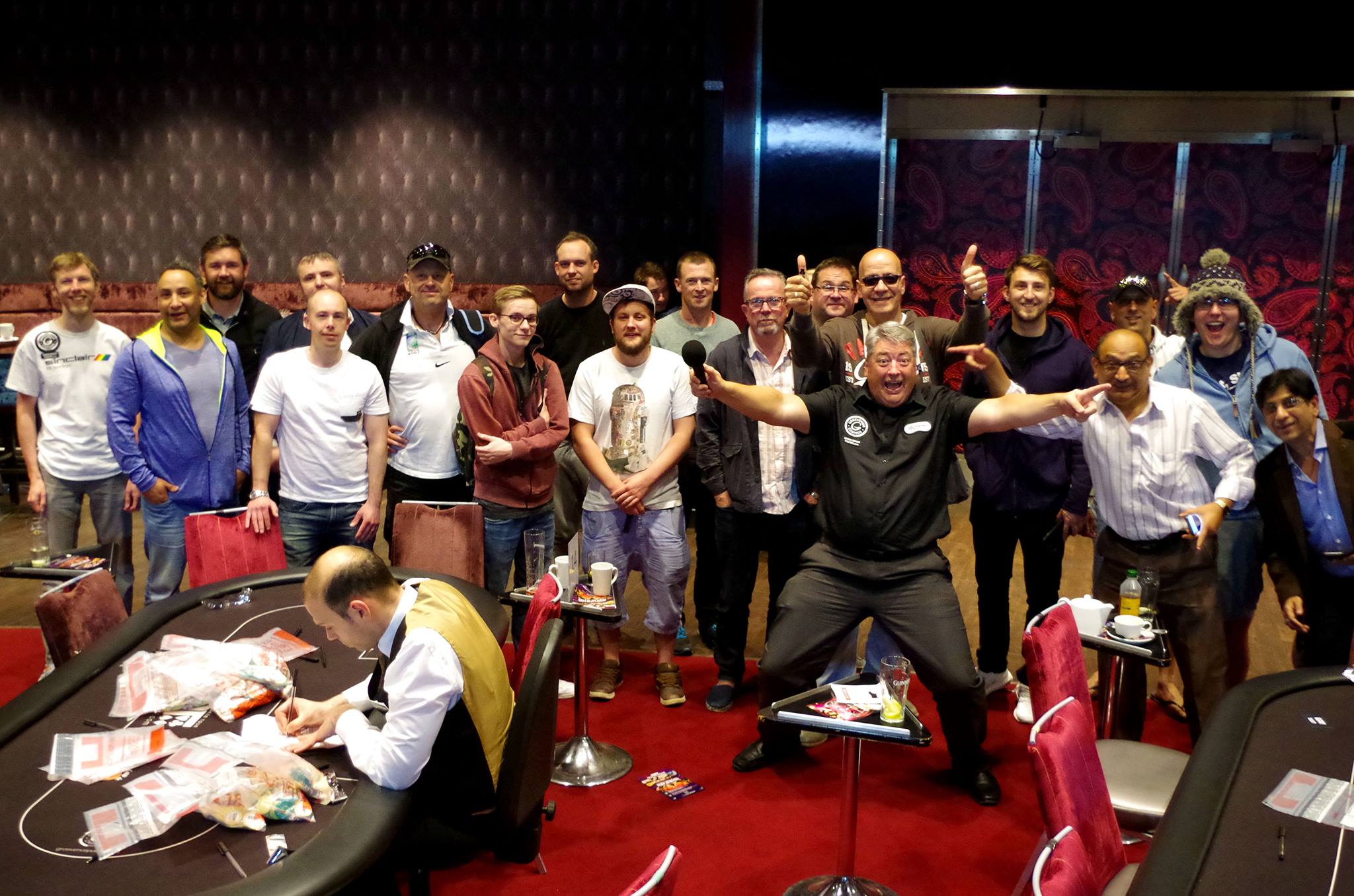 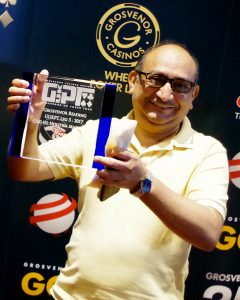 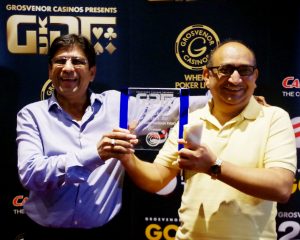 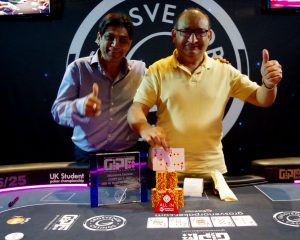 Well what more can we say about the most entertaining player to watch in the UK, apart from he has done it again!!

It’s been another great event on the UKs longest running poker tour with 247 entries in total over Thursday & Friday. 19 players came back today all in the money but all with their eyes on the first place prize of £35,310.

It took around two hours of todays play before we were down to the final nine players.

The final table lasted only five and a half hours and was a great one to watch. Ashley Hunt looked in control, but Mallus unorthodox style was different for the whole table to deal with and he has come out on top.

Ali wins his second GUKPT after winning the Manchester leg back in 2015. He also came second last month at the leg in Walsall, just missing out on the title as Gareth Howard won it.

He’s one of the nicest guys you can meet and a more than worthy winner, taking home £35,310.

Well done to all the staff this week as the tournament has ran like clock work. Also a massive well done to everyone here at the Reading South Grosvenor Casino as they have played a great host again.

That’s all from us for another event, we will be back in a months time for Leg 6 at The Poker Room, which is going to be a really busy one.

Until next time, be lucky.

as Ali flops a pair of threes.

With that final hand we have a winner!!

Barry Cobb is our runner up as he finishes in second place for £23,090.

Alli Mallu has went one better than last leg as he is the GUKPT Reading Champion taking home £35,310!!

Heads up is now underway with Ali Mallu holding 3 million against the 1.8million of Barry Cobb.

Break time for the players as they take 5 minutes before beginning heads up play.

as Ali flops a straight!!

The river card is meaningless as we lose Ashley Hunt in 3rd place for £14,450. 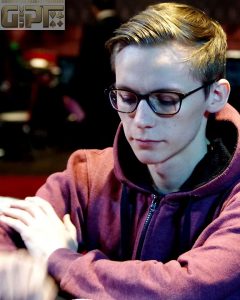 Ali Mallu will go into heads up as the chip leader with around 2.8million.

Blind on blind Barry Cobb & Ashley Hunt get it all in…

The board runs out nine high as the fours hold for Barry.

Barry takes the pot and doubles up to 2 million chips!

The blinds increase as we begin level 28. 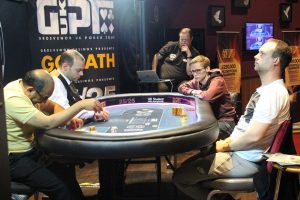 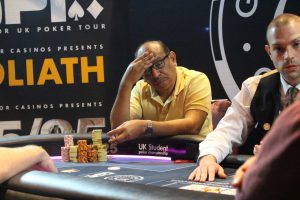 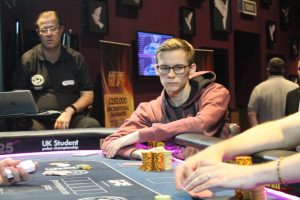 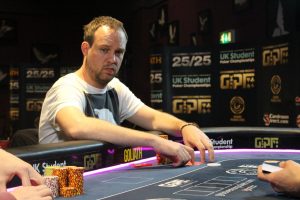 No real action to speak of in the first 20 minutes of level 26.

Just small pots being played and each player is winning their fair share of pots.

Ali Mallu is still trying to put the pressure on though by over shoving every now and again.

The blinds increase as we begin level 26.

for jack high against the

of Barry who has an over pair…

Barry just needs to dodge a Jack to have over three million chips going into heads up play….

Ali Mallu rivers a pair of jacks to take the pot with two pair, he is now the chip leader with 2.1million.

Barry Cobb has just took a big pot off Ali MAllu, check calling Ali down to the river on a board of Qs

Barry leads out on the river and Ali folds showing

Barry mucks but moves his stack just over 2 million while Ali is down to 900,000. 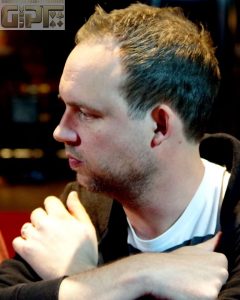 and will need to hit the board against the

as both players flop a pair.

A decent run for Jay Harwood as he exits in fourth place for £9,390. 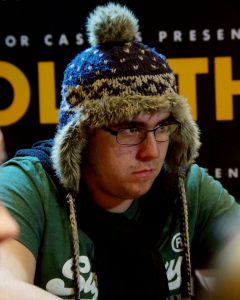 Ashley increases his chip lead and now has 2.4million.

The dinner break was extended but the players are now back to begin four handed play on a fourty five minute clock.

Dinner break now for the players as they take 30 minutes.

for two overs and a gut shot. Tony tables

for two overs and a flush draw, he need to hit to survive.

Tony bricks the turn and river and exits from the tournament in 5th place for £6,420. 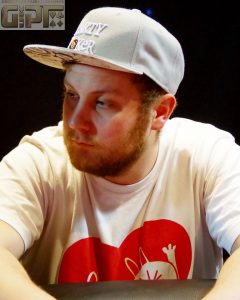 Jay Harwood get his 480,000 stack all in against Ali Mallu who seems to be in every single pot at the minute.

It’s a coinflip as Jay tables

and has the best hand against the

! Two pair for Ali as he takes the pot and now has 1.5million.

Andy Hills & Ali Mallu are at it again.

as Ali flops a flush draw

The action folds round to Jerome O’Shea who moves all in for his short stack of ten bigs and is called by Jay Harwood in the big blind.

Both players miss the board and Jay adds the pot to his stack which is now up to 560,000. 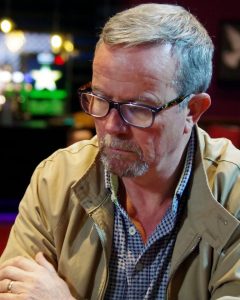 Andy Hills & Ali Mallu get it all in for a huge 1.2million chip pot!!

Hill has the best of it tabling

as Ali flops a set of nines!!

A huge pot for Ali as he takes the 1.2million with a set of nines.

Tim Wright moves all in from the cut off for around 260,000 with the blinds at 10/20k. Barry Cobb makes the call from the big blind and the cards go on their backs…

and has live cards against the

!! Barry retakes the lead as he turns top pair 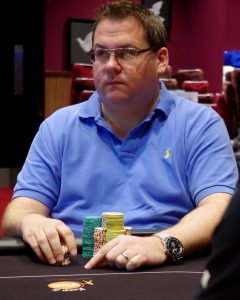 Ali Mallu makes a huge open again as he slides 188,000 over the line from late position. The action comes to Andy Hills in the big blind who goes into the tank before saying “Lets go for the win” and moves all in, Mallu makes the call and the cards go on their backs…

Both players flop a pair, but the pair of queens is good for Andy to take the pot and double up to around 750,000!! 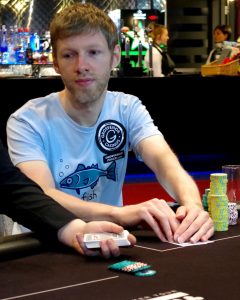 as Ali makes a pair of Jacks to take the lead.

…. Tim turns a gut shot and a flush draw.

Ali drops just under a million.

John Allison opens on the button, Ashley Hunt three bets from the big blind, John moves all in and Ashley quickly calls.

, while Ashley has found KINGS in the big. 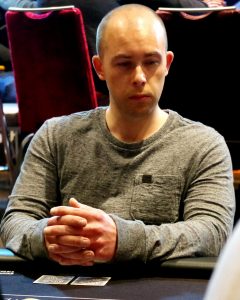 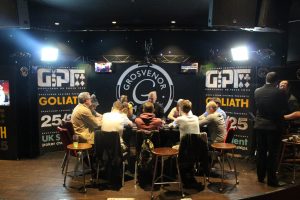 The final table is now underway with 9 players remaining.

Break time now for the players as they take 15 minuted before beginning the final table.

Mark Reed three bet shoves his 65,000 stack over an open from Jerome O’Shea, Jerome makes the quick call for not much more and the cards are tabled.

and has ran into the

Aces hold for Jerome who takes the pot.

We lose Mark Deed who has been clinging on for the last two levels. He finishes in 10th place for £2,220. 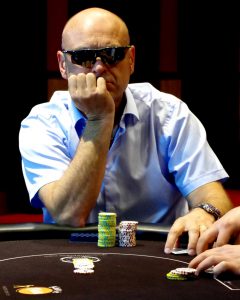 No break for the players as they are still hand for hand.

Jerome O’Shea gets his 150,000 short stack all in and is called by Andy Hills.

Kings hold for Jerome who takes the pot and doubles up to 300,000. Putting him back in the game.

Mark Reed moves all in and is called by Andy Hills.

as Andy flops a flush draw.

The river card the

The sevens hold for Mark who takes the pot and double up to 130,000, but he is still one of the two short stacks in the field.

We have two short stacks in the field who are in dangeer of being eliminated. They are Jerome O’Shea with 100,000 and Mark Reed with just 70,000!!

With the players playing short handed both need a double up as soon as possible.

We are now hand for hand on the final table bubble.

Tim Wright opens, Florentin Stoica moves all in for his 100k stack and Tim makes the call.

and is ahead of the

of Tim who has live cards.

Which is exactly what happens as the flop comes

!!! Tim turns trips to take the lead, and leaving Florentin as sick as a dog drawing to two outs…

Tim takes the pot and now has around 800k while Florentin Stoica heads out of the tournament in 11th place for £1,970.

Keiron Duncan has just left us in 12th place.

He takes home £1,860 for his deep run in the Reading main event.

David Crane who played on Thursday managed to win himself a £500 worth of GUKPT vouchers by winning the draw. He used the £500 and added £50 himself to re-enter and have another go at GUKPT Reading.

His freeroll lasted until today but sadly it has come to an end.

David who was short stack last break has just busted in 13th place for £1,730. Not bad for an entry that was won. 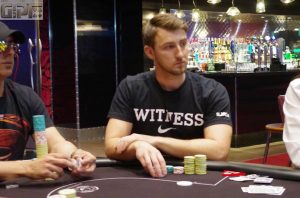 We lose another previous GUKPT Winner from the tournament as Martin Bader heads out of the door. 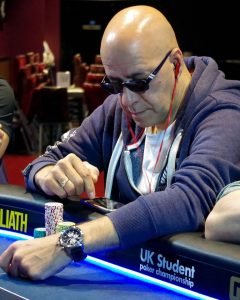 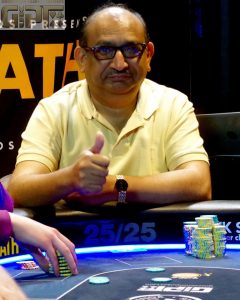 The last hand before the break Mark Garnder moved all in from the small blind and was called by Alli Mallu in the big blind.

and was in bad shape against Ali who had found

in the big blind!!

The turn gave Ali a sweat as it came

giving both players a gut shot and Mark four outs to survive. 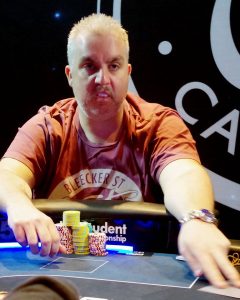 The players are back seated as we begin the next session.

Well after a huge lull in the action things have started to pick up now.

Axat Mawji is the next player to leave us from GUKPT Reading. He heads out in 16th place for £1,360.

Jack Hardcastle gets his short stack in with pocket threes and runs into pocket nines. 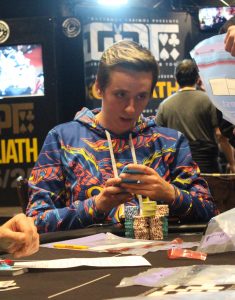 We have just been handed the ID card of Alan Peers who has been eliminated from the tournament. 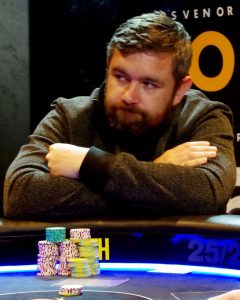 Alli Mallu has had the biggest increase in chips over the first level of play on Day three.

He has increased is stack to a massive 620,000, which is good for the chip lead at the moment with 18 players remaining.

The GUKPT Regular only has one gear and that’s fast as he puts the pressure on the other players.

All is quiet here during the second level of play.

This is the quietest start to a final day ever! 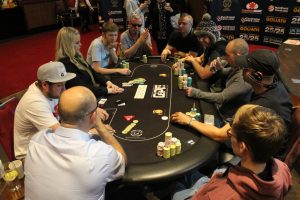 Eliminated by Andy Hills he takes home £1,240 for his effort.

With the exit of Lee we break a table as we are now down to 18 players playing on two tables. The cards are in the air as we begin level number 19 of the tournament and the first level of day three.

Good morning and welcome back to the third and final day of GUKPT Reading.

It’s been another great event with 247 entries in total over the two days of buy ins. Then yesterday the field was whittled down to just 19 players. Those players are all back today to play down to a winner, then are all guaranteed £1,240, but they’ll all have their eyes on the first place prize of £35,310.

Ashley Hunt leads the players who are coming back and is the only player over half a million chips. He will be the favourite to take home the trophy. There are also four previous GUKPT Champions in the field in Alan Peers, Martin Bader, Ali Mallu & Andy Hills. Full chip counts of the 19 are: 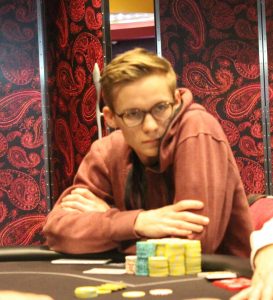 Play begins at noon today and we will be with you for the whole day. Bringing you live blog updates, chip counts, exits, hands and of course the GUKPT Live Stream that runs on a 30 minute delay with all hole cards shown.