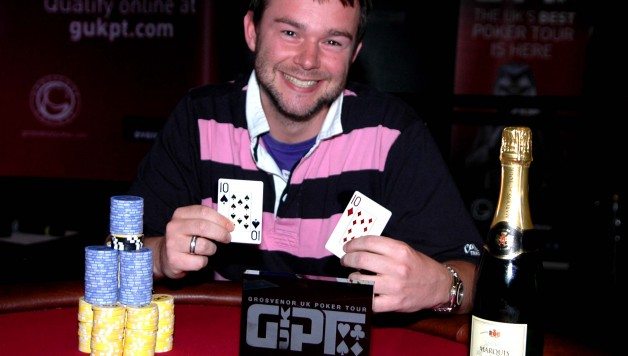 James Martin is GUKPT Reading champion, pocketing £22,640 and a seat in the Grand Final after defeating Grosvenor Poker sponsored pro Jeff Kimber in a heads up that lasted just one hand.

The two players got all the chips in preflop as soon as two-handed play begun, James’s pocket 10s holding up against Jeff’s A-J to land the biggest win of his poker career.

“I love the new casino in Reading and thoroughly enjoyed the tournament,” said James as he toasted his victory with a bottle of champagne.

“I promised if I won I’d take my girlfriend to the Caribbean, but I’m thinking I might take her to Brighton for the GUKPT instead.”

Jeff, who was making a record seventh GUKPT final table appearance, took home £18,000 for his second runners-up finish, to go with his 2008 GUKPT Walsall win.

Paul Howard was the unfortunate bubble boy, going out 18th after getting his short stack in with A-K against Adam ‘Buzz’ Howlett’s pocket sixes and failing to hit.

With the 17 remaining players all guaranteed at least £1,030, the action was fast and furious as they played down to the following final table:

The final started in tentative fashion, with the short stacks doubling up for the first 90 minutes before James started as he finished, taking a player out with pocket 10s.

Paul Dunne three-bet shoved from the big blind with pocket eights and couldn’t find one of his two outs, sending the two-time Sunday Million finalist out in ninth place for £1,650.

The pocket 10s didn’t work out so well for David Lloyd, who departed in eighth with £2,270, losing a big flip to chip leader Timotheos Timotheou, known as Tim Tim, whose A-Q flopped not one but two ladies.

John Burberry grinded his short stack with great dexterity all day but luck deserted him at the crucial moment, his A-J losing out to Alex Zeligman’s A-6 all-in preflop. John took home £3,090 for his seventh place finish.

Alex, an experienced cash player from London, had built up a big stack, but he suffered a huge outdraw against ‘Buzz’ Howlett, the local legend flopping a king to see his K-J defeat Alex’s queens.

Not long afterwards Alex was on his way home with £3,920 for sixth. With less than 20 big blinds, he three-bet shoved from the big blind when Jeff raised the button, but the Grosvenor pro had found pocket kings, which held up against A-T.

Tim Tim turned up the aggression five-handed, but it led to a quick demise from chip leader to fifth place finisher.

He doubled up both Jeff and James before running into Ellie’s pocket kings with A-6. Tim cashed out £4,950.

Buzz, who had started second in chips, got short and then back up to among the chip leaders, left the party in fourth place for £6,390. His A-Q couldn’t hit against Jeff’s pocket sixes, and we were down to three.

The action was fast and furious, as chip leader Jeff gave Ellie a huge double up with A-7 v J-J before doubling back up twice to leave the stacks pretty even.

Ellie then went to war with James, and got her money in in great shape with J-8 against James’s T-8 on a J-T-6 board.

Unfortunately for her, James was having a great day with his 10s, and he found one of his two outs on the turn to send Ellie home in third with £10,520 and take the chip lead going into a heads-up battle that was more of a skirmish, lasting but one hand.

Team Blue Blood were out in force all week, between them cashing in every event bar one, including two of the Main Event final table, Tim and John.

Special mention must go to their team manager Pete Wigglesworth, who managed to cash in four of the seven side events, including chopping three of them.