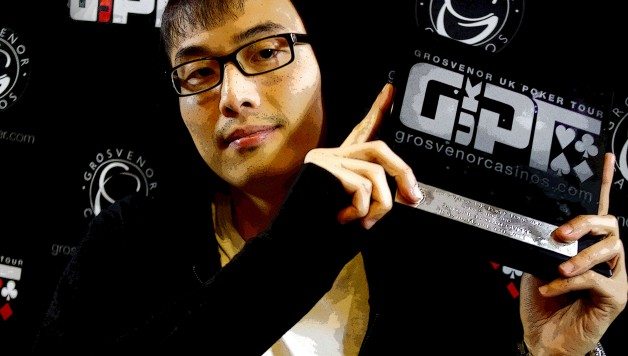 Harry lays down the Law at GUKPT Leeds!

Harry lays down the Law at GUKPT Leeds!

27 year old Harry Law has become the first ever Grosvenor Casinos GUKPT Leeds Main Event Champion. A new stop on the tour, Grosvenor Casinos’ Leeds Westgate has been a tremendous success, attracting 228 runners and creating a prizepool of £114,000!

Starting the final table with the shortest stack, the odds may have been against Law but a run of great cards and a few lucky breaks left him the last man standing, capturing his first Major UK title and £32,500. A professional player from London, Law can often be found playing cash games in the world famous ‘The Poker Room’, based on London’s Edgware road, next to the Grosvenor Victoria Casino.  It was a change of scenery though that has rewarded him this past weekend as he made the trip north for the latest leg of this prestigious UK Tour.

It was a roller coaster of a final day. After eliminating both 9th and 8th place finishers, Law soon found himself going from shortest stack to the first player to break the 1 million chip mark. It wasn’t all plain sailing though, as he experienced a turbulent patch with just 5 players remaining. Many thought his time was up when he got it all in holding King Queen and running into the Ace King of Martin Paul.  A Queen promptly arrived however, giving Law a timely double up and throwing him right back into contention. From there he never looked back. Even a flopped 3 of a kind for Mark Evans couldn’t stem the tide as it was no match for Law’s flopped full house. Down to 2 and heads up play was over in record time as Michael Howard’s pocket 7’s were no match for Harry’s top pair of tens. A talented player and deserved winner, Law capitalised on a good run of cards at the final table to seal the deal, taking the coveted trophy back to the Capital

The 1st ever GUKPT Leeds was also the final £550 buy-in £100,000 Guaranteed event of Season 8. Action now ramps up with the return of the £1,080 buy-in, £200,000 Guaranteed GUKPT Main Events. The next leg is at the Luton G Casino and runs from the 12th to 19th October. Win your seat online at www.grosvenorpoker.com or at your local G Casino.