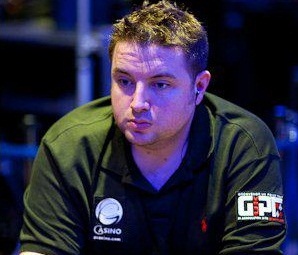 Season seven of the GUKPT got under way at the Vic and the buzz around the whole tour is as loud now as it was when a young baseball cap wearing kid beat his best mate heads-up in Bolton to take season one’s first trophy back in 2006.

Not sure whatever happened to Praz Bansi and Karl Mahrenholz, but the tour is alive and kicking and there was a real buzz at London’s flagship casino as almost 400 punters ponied up the £1000 entry fee for a shot at following in Praz, Sam Trickett, Julian Thew and all the other main event winners over the years.

Despite missing only a handful of GUKPTs over the years, I still haven’t decided if it’s best to play day 1a or 1b, but with re-entries allowed, one on each day, I thought 1a at least provided me with the most options should I bust.

My table looked fine, with only Richie Allen of any repute, though he was annoyingly sat two to my left.

It felt like a bad beat when we lost the guy to my right, who I had played with before and, it’s fair to say, was there for a good time not a long time, and Jamie Roberts, son of Ben and extremely good player in his own right, sat down to Richie’s left.

However, the early exchanges were dominated by a guy two to my right, who presumably had just popped out the office in his dinner hour and really had to get back to work.

He looked very pleased with himself when he got a hero call right against me in the only significant pot I played in the first two levels. It soon became evident it wasn’t heroic, he just called every bet, and it just so happened this one was correct.

The big blind called and so did the serial caller, and we saw a flop of T-4-3 rainbow. They checked to me so I took a stab of 550, pretty sure I’d be done with the pot if I didn’t win it there and then.

The big blind folded but the station called. The turn was the seven of clubs, giving me a flush draw and an up and down straight draw. This was the biggest turn card in the deck for me, from having no hand no draw I now had 15 cards to make the nuts, presuming I held the only back door flush draw.

My friend checked, I fired 1100, pretty sure I’d win the pot here and now, and if I didn’t, surely I could just hit one of those lovely 15 cards.

I didn’t really consider calling and missing, but that’s what happened and he checked to me again. The river had paired the three.

What could he have? I thought the most likely limp-call hand was 9-T of T-J, maybe a pair in between top and second pair on the flop, pocket fives maybe.

I decided to fire a third barrel, and got called pretty quickly by the old A-4 offsuit. It’s fair to say he got the most possible out of his hand, and fair to say I was pretty annoyed.

Fortunately, having learnt the hard way what a calling station he was, I owned him a couple of times before he was sent on his way, presumably back in time for his afternoon meeting, just after the first break.

It takes some work to dust off 20k chips when the big blind has only been 150 for 20 minutes, but some people are just lucky I guess.

I dug in and decided it was going to be one of those days where with few big hands and two good players to my left, I was going to have to put in the hard yards.

When the table finally broke I was pretty short, and despite doubling up on my new table with A-K v Jeff Duval’s A-Q, I came back to day two with just 20bb.

My second day started well, just calling a raise with K-Q suited in the blinds and check-rasiing all-in on a king-high flop three-handed to just about double up with no showdown.

I then called a 6bb shoves with A-J and managed to somehow beat aces, before realising that was against the fella I knocked out of a PLO comp at the Vic last year with a beat and next day he came and found me to tell me I’d never win a penny player PLO tournaments. I tried to get a bet that my three WSOP PLO finals were more than he’d even seen on telly but he was too mad.

With the blinds and antes going up, and a slight accident with A-J on a jack-high board against a set, I was back to 15bb when I opened in the cutoff with A-T off.

Simon Deadman’s better half Shola asked how much I had before making a pretty standard shove with K-Q and I pretty standardly called and lost the race.

I kept a keen eye on the final, and was chuffed to see Vic regs like Jeff, Jamie and eventual winner Martin Bader up there, as well as an old online foe from many years ago Dave Barraclough, Doobs.

I avoided any side events and instead waited to head back to the Vic a few days later for the UKIPT London.

With three start days there was again the question of when to play, but Wednesday, day 1b fitted best with my non poker commitments so up the Edgware Road I trudged.

I found my table and quickly reached the conclusion I’d been pretty unlucky.

One to my left was two-time UKIPT champ Joeri Zandvliet, who I’ve tangled with in these comps before.

He’s like the Dutch version of Thewy, wins loads of comps and is the nicest guy when you outdraw him or play bad, a combination of which I’d done last time we shared a table at UKIPT Newcastle.

We were joined by a pretty aggro Polish kid who could definitely play, a couple of decent young English online pros and one old fella who managed to dust off his stack within the first level and leave his seat for another online hero.

Progress was pretty slow before dinner, but a trickily played pair of aces, followed by aces again when a shortie shoved saw me flying towards 50k when the average was barely half of that.

That’s when the wheels started to come off, though.

I got in a tricky spot with two 10s in the big blind when a serial raiser opened and a guy who had three-bet him twice already reraised.

The original raiser had made it 1200 out of his 10k, the three-bettor 3100 out of 40k. I had about 40k and decided I could make it 5k-ish and call it off against the first guy or fold to the other, while looking super strong making my first cold four-bet of the day.

The first guy had dem aces and that was the start of my downfall.

I missed a couple of draws and again didn’t manage to flop any sets despite trying very hard.

I then got in a pot I could probably have avoided, but as someone who defends blinds on a regular basis and who is happy playing post-flop against guys who generally prefer to end pots pre, I’m not too annoyed about my bust out.

The flop of A-J-T with two clubs gave me an up and down. I’d been targeting getting in hands with this serial raiser as I’d noted one or two things about his game I felt I could use.

He c-bet 2400, the button called and again I peeled. I was using my Paul Daniels extra sensory perception to will the dealer to place a red eight on the turn, and so he did, right on cue.

I checked again, knowing this kid never slowed down. He bet 3400, the button called and I had a bit of a think before shoving.

The raiser quickly folded, but the button made the call. I already had a feeling that my second nuts weren’t good enough as I flicked over my straight, and just as I suspected, he showed K-Q of clubs for the nuts with a flush redraw.

My ESP had been slightly wasted, seeing as I was already drawing dead. As I skulked off I was trying to work out just how perfectly that board had to come for me to do my stack. It would certainly take a while to rig it if you were playing a joke on a friend.

I dodged the EPT and as the next GPS event is in my home town of Newcastle, I’m taking the chance to head up there and see family and friends for a while before returning to London for a couple of days before a couple of weeks in Vegas for some rest and recuperation, and maybe a few Venetian deepstacks.