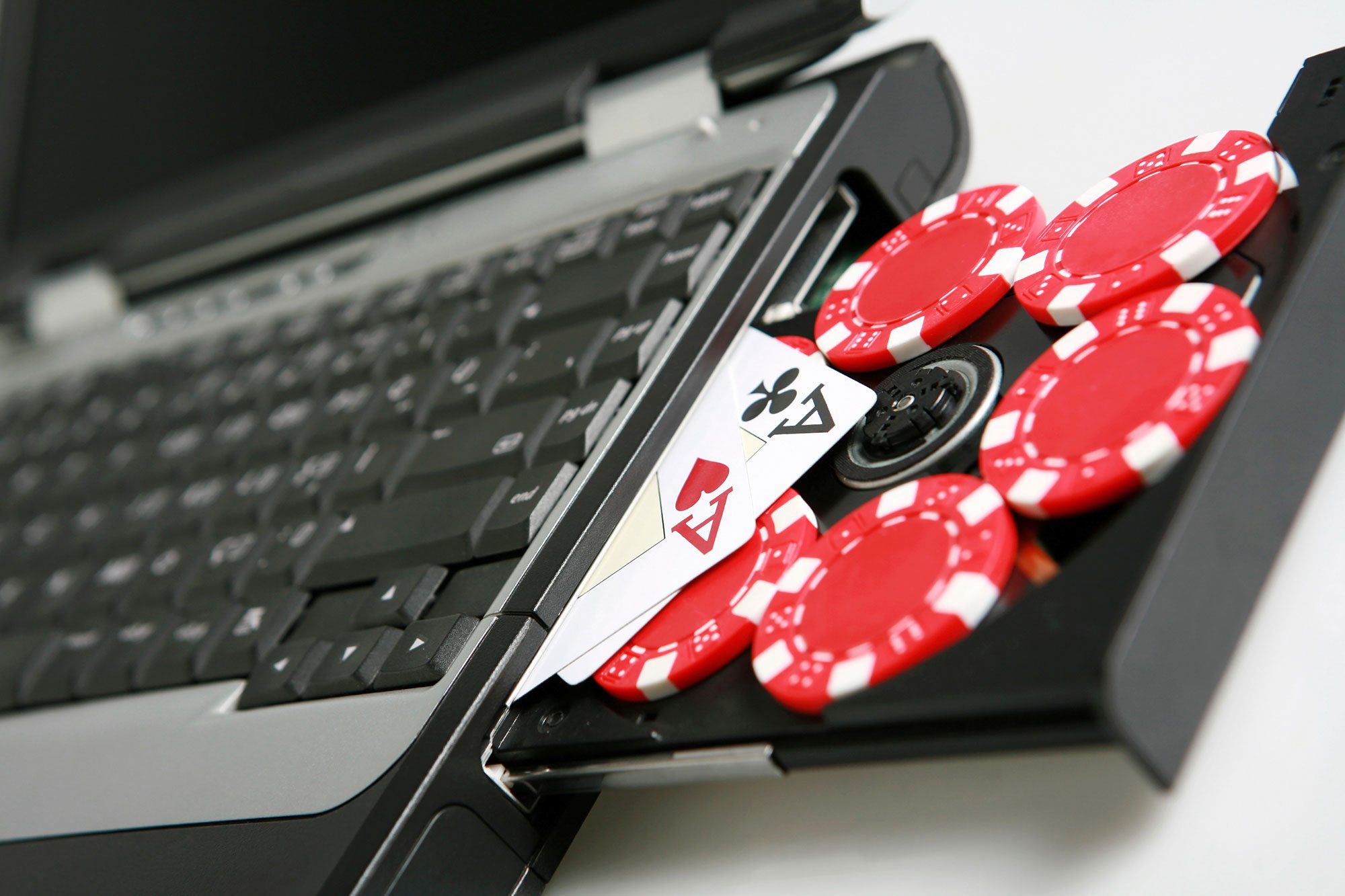 Need some help getting to grips with online play?

First, the bad news: You just tore your anterior cruciate ligament in a nasty stairwell spill. Not sure of the details, but I understand that alcohol was involved. Now the good news: For the next two weeks, you’re under strict doctor’s orders not to drag your raggedy arse off the sofa. Which is fine, as that’s where your raggedy arse prefers to be.

I know it galls you to think that a sharp cookie like yourself won’t be ready to shred any game on any site just by showing up and flashing your brilliance, but the fact is that Internet poker plays radically differently from the real-world version. Even if you’re the undisputed king of your local cardroom, playing online will mess with your head at first. The pace of play is faster – as much as ten times faster. Visual tells are absent. The whole mechanism for sizing bets and moving chips into the pot is different from what you’re used to. Even reading the cards correctly can be a challenge. And that’s to say nothing of learning to take all of your poker information from a little six- inch by eight-inch square on your computer screen as opposed to the whole poker environment of a cardroom or casino. So do yourself the hugely money-saving favour of booking ample hours on the play for free option of your chosen online poker site until everything about it is second nature to you.

I know what you’re thinking – what’s the point of playing for free? Since nothing’s at stake, no one plays properly and I won’t learn anything but bad habits. Firstly, it’s not true that no one plays correctly when money’s not at stake. Loads of people are doing what you’re doing – playing for free for the express purpose of learning to play right. Second, you’re not even dealing with strategy yet. At this point, you’re just trying to master the look and feel. Remember… always take biscuits when biscuits are passed!

The free tables option on any site is a big fat biscuit just waiting for you to enjoy. So play for free, play your best, and don’t be surprised if you go ‘broke’ and have to reload your free money many, many times until you finally find your feet. I think you’ll agree that it’s better to lose fake money than real money any day.

Once you’re comfortable with an online poker site and mastered its mechanics, you’re ready to play for real cash and to embrace the main rule of online poker: DON’T GO BROKE! Ideally, money should flow from the online poker site into your bank account. If it’s going the other way, even in small amounts, you’re doing something fundamentally wrong and you need to adjust.

To preserve your bankroll, never put more than ten percent of it into play at any one time. That sounds Draconian, I know, but it’s the only way to go. If you’ve only got 100 bucks in your account, then – sorry – you need to find a game or a tournament small enough for ten bucks to be adequate funding. One bad session, even one bad hand, can destroy an over-deployed bankroll. Safeguard yours with the ferocity of a lion protecting her cubs, and do so by never risking more than a tiny slice at a time. Further protect it by following the double/half rule – whenever you double your initial stake, move 50 percent of your profit back to your bank account. This is a good way to make sure that you get something more out of your online playing experience than just a lot of killed time.

A lot of players worry about collusion on Internet poker sites. While I’m not so naive as to believe it never happens, I think that the fear is greatly exaggerated in most players’ minds. Still, an exaggerated fear – even an unfounded one – can throw the most stable player off their game. The simplest solution is simply never to play for more than recreational sums online. That way if you lose (for whatever reason) it’s not the end of the world. More important, you’ll be able to play without fear. Remember the words of the sage (well, me): In the presence of fear, nothing is possible; in the absence of fear, anything is possible.

A healthy respect for online poker and a carefully measured investment will allow you to keep your fear at bay and to play the game correctly.

Stick to the plan

Because online poker is always there, it’s easy to fall into the habit of just playing a few hands whenever you have a few spare moments. The real problem with this habit is that it has no ‘exit strategy’. You can easily fall prey to OMHS – One More Hand Syndrome – where a few hands turn into a few hundred and, if you should happen to have a bad run, a short session can turn into a protracted and catastrophic game of catch-up.

Many players sensibly deal with this problem by playing only scheduled tournaments or sit-and-gos and using the end of the tournament as a cue to end their session. Whether you choose tournaments or cash games, every time you sit down to play, you should know what game you’re going to play, at what level and for how long. If this means setting an alarm, set an alarm. Above all, when you’re running bad, run away! If you find yourself jumping from table to table or site to site in search of that one ‘get well’ game, you’re probably heading downhill fast.

Your plan for online play must include eliminating all distractions. With so little information coming at you from the small screen, it’s easy to lose focus and let your mind wander to the television, the radio, or that tasty single malt you’ve been saving for when the wife’s away. Of course, your efforts to maintain focus may get you so tuned into the game that you play too many hands – this is a common consequence of online play. Further, since you’re ‘only’ playing for numbers on a computer screen and not for real chips that you can touch and hold, it’s easy to feel no pain when you lose. Compound all this with the accelerated pace of play and you’re looking at online poker’s biggest pitfall, expressed as maths: Distraction + alocohol – discipline x pace of play = disaster.

The only way to avert this pitfall is to treat the ‘game’ of online poker with no-shit seriousness every time you play. Anything less is a recipe for poverty.

And while we’re on the subject of pitfalls let’s take a look at some of other common mistakes online.

What many players love about online play is the ability to play more than one game at once. They even justify this by saying that their hourly win rate goes up by seeing more hands. This may be true for some, but not for most. You should think long and hard before deciding that it’s true for you. Making simultaneous decisions in multiple situations against different line-ups when time is of the essence can only lead to lapses in judgment, ill-considered actions and mistakes.

Most people who double-dip say they’re doing it to maximise their profit. They’re really just doing it because they’re action junkies who have found that one game – or two, or three, or four – simply won’t quench their thirst for action. Ask yourself: Isn’t 100 hands-an-hour action enough for you? And wouldn’t you be better off playing one game perfectly than two or more games carelessly?

The same need for action that leads to doubledipping also leads many players to short-handed play, where the wait between hands is brief – or, in the case of heads-up play – non-existent. Trouble is, sharks abound in these shallow waters. If a superior foe has you in his sights and has you in a short-handed situation, you’re asking for trouble.

There are a few things you can do to solve this problem. One is to shore up your short-handed skills so that you can hold your own (and, in fact, be the predator) in this situation. The other is to keep good written records (we call this a book) on all your foes so that you’ll know if you’re facing a shark short-handed. Above all, if you find yourself out-classed, out-gunned or out-thought, don’t let pride or ego keep you in the game. Get out before the situation spirals out of control, because a short-handed game against superior foes will gut your bankroll like a fire at a chemicals factory.

When playing online it’s easier to lose fast than to win fast – and it’s easy to see why. To score a big, quick win online you have to be in just the right game at just the right time against just the right opponents. You have to play correctly against very bad players, get lucky and then get out. That sort of harmonic convergence doesn’t come along very often, and hence why explosive big wins are rare.

Explosive big losses, on the other hand, require only a ‘moronic convergence’ of your own bad focus, bad discipline or bad attitude. In cardrooms, the languid pace of play slows down everything, including your tilt or flawed judgment. The online pace of play can rip open a tiny leak in your game and turn it into a torrent in an instant. Internet poker, then, requires that you always be self-aware enough and disciplined enough to get out of your own way! If you can’t do these things, you will be punished and months of painstaking profit will be swept away in a few horrific hours of play.

I don’t want to scare you – really, I don’t. Online poker is not all hell and damnation and explosive bankroll decompression. It can be a wonderful way to pass the time of day and be profitable if you do it right.

But like the man said, ‘It’s a powerful force that can only be used for good… or for evil.’ So take the game seriously, treat it responsibly, play with precision and eradicate self-indulgence. Do these things and online poker will be a boon in your life – at least for as long as you’re laid up on the couch.